I’d booked a room in the Macdonald Burlington hotel weeks before the event and as I was preparing to leave home in Worcester I received a WhatsApp message saying, ‘Will get to the hotel for 6, lots of drinkies xxx’.  It was from Rachel Mahoney and I was looking forward to seeing her in her cocktail dress and Ewan in a suit.  As I got dressed-up, up in the room, it was amusing to think that last year I’d sat at my computer at home in a t-shirt and jogging bottoms for the ‘alternative, on-line thing’ – this time it was a proper event at which to see and be seen.  The next message I received from Rachel was, ‘We’re by the bar xx’ – at three minutes past six – no surprise there!

The Macdonald Burlington is an odd mixture of tired Edwardian opulence and 1990s kitsch.  The Horton Suite was the latter.  Entirely windowless, brightly lit and with a carpet that would take on a life of its own after one too many – more of a conference venue than a dinner venue.  But the dresses, suits and bow ties more than made up for the environment.  It was lovely to realise that there was almost no-one I didn’t recognise out of the 100 plus in attendance.  There was a fair amount of chuntering, however, about the complete lack of ‘real’ ale at the bar..!  A pre-dinner gin and tonic would have to do – and there was a delicious Peaky Blinder Spiced Dry Gin – apt, in the heart of Birmingham.

At about 7pm we were ushered from the bar area into the main hall and found our tables.  I was seated beside one of the few people I didn’t recognise and introduced myself and asked his name.  The response was unexpected, ‘You may not know me but I know you.  My grandmother was the midwife at the birth of your father and his identical twin brother’.  Ah…  ok, but I don’t recognise you – where are you from..?  Again, the response was… odd – ‘I’m from Oxford and you’ll find out why I’m here, later’.

After a while everyone stood and applauded as the ‘top table’, led by Steve and Janet Horton, came in from the bar area.  With a welcome from Janet, dinner began.  The food was excellent – and surprisingly hot.  A tomato soup with basil oil was followed by a chicken supreme dish and sticky toffee pudding.  And the service was perfect – almost imperceptible.  As the after-dinner coffee and tea were being served the speeches began.  The Horton double act proposed The Queen and the memory of the late Henry Johnson before there was an interval to allow for mingling for a while.

After this, Janet proposed ‘The Church’ and then we were serenaded by three leads of Littleport Little Surprise Maximus on the newly restored Blews’ handbells – and I finally discovered why the gentleman with whom I’d shared dinner was here.  He was Bernard Stone and he had recently refurbished the bells.  He was the guest of the St Martin’s band.  Interestingly, he had decided that the tenor bell was a poor casting and it had been recast.  We heard both the old bell and the new one during the touch – Alistair Cherry was ringing the tenors and nonchalantly turned and swapped the old one for the new one between one change and the next.  To be honest, I couldn’t hear any difference during the ringing but was able to ring both of the bells later, and there was a noticeable weakness in the old bell.  Is this a common phenomenon in tower bells – bells that sound poor on their own can often be perfectly acceptable when rung with others..?

The handbell ringing was followed by the Guild tribute to Andrew Stubbs.  This was proposed by Steve Horton, with a response by Michael Church and also by a family member, Heather Richards.  Although Andrew had sadly died after a short illness on 2nd April 2020, it had been decided that his life should be celebrated at the first post-pandemic Henry Johnson Dinner to be held ‘in-person’.  Pre-pandemic, Andrew used to join the Cathedral Sunday service ringers in the coffee shop after ringing – so, although I only knew him from short chats in the coffee shop in his latter years, it was good to hear more of his life.  Amongst many other achievements in ringing, he had been Life Vice President of the St Martin’s Guild and had held the position of Master for 11 years. He was described as a man of great influence and wisdom who is sorely missed.

The sombre mood was lightened by the final speech of the evening – the Guild Master, Clare McArdle’s, ‘Health of the Chairs’.  When I read this title in the programme I was a little confused as to what chairs were being referred to…  but of course, it was the Hortons, the joint Chairs, the MCs – and great friends of Clare’s.  Whilst I apologise for remembering little of the speech, I did make a single note on my programme, ‘I’m just checking the weather forecast’.  It must have been something that stood out at the time but it meant as little to me when I re-read it as it probably means to you now – until I asked Clare about it.  It seems that Janet’s job means that she has to decide (or at least she is aware of a decision being made) whether or not to grit the roads in Birmingham, each day. She’s often ‘just checking the weather forecast’ when she should be ringing, at Harborne.  The connection between this and the excellent job that she and Steve did as joint chairs, has been completely lost to the effects of Peaky Blinder Gin and white wine on my memory – and to time, though.  To the health of the chairs..! 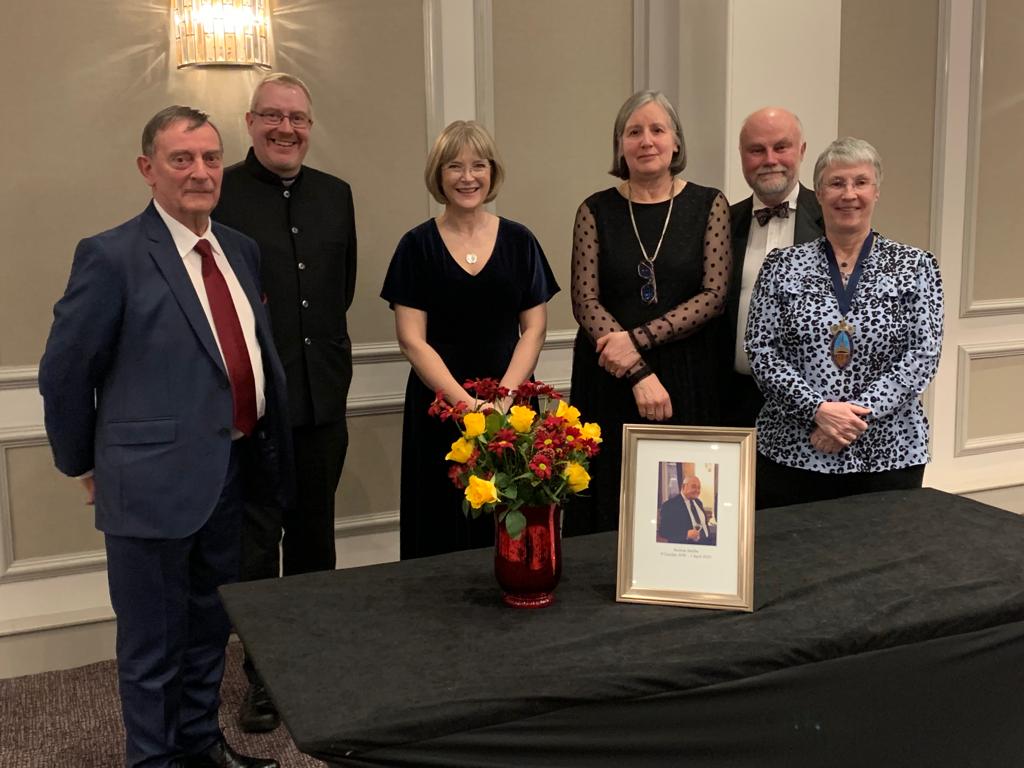 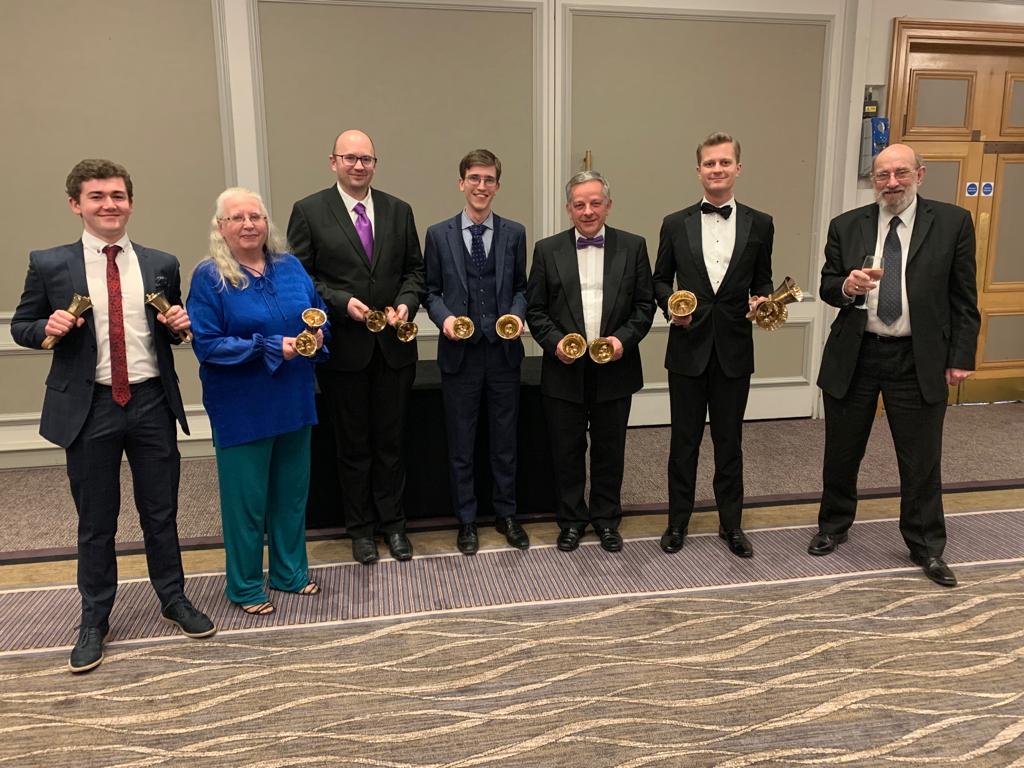 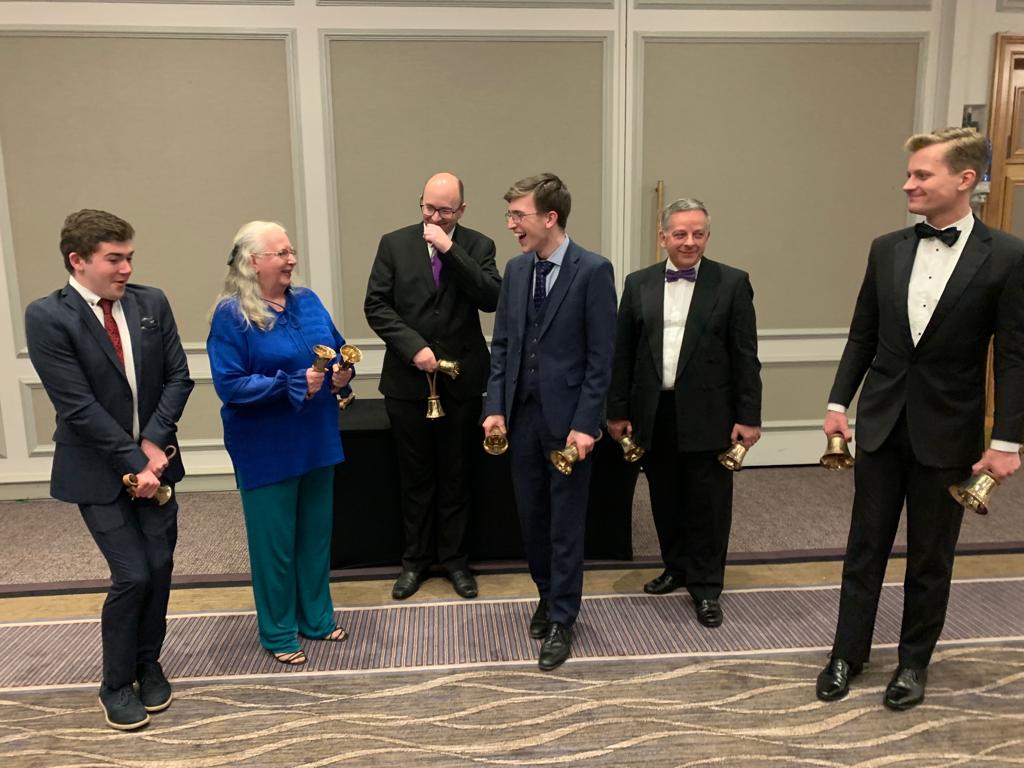 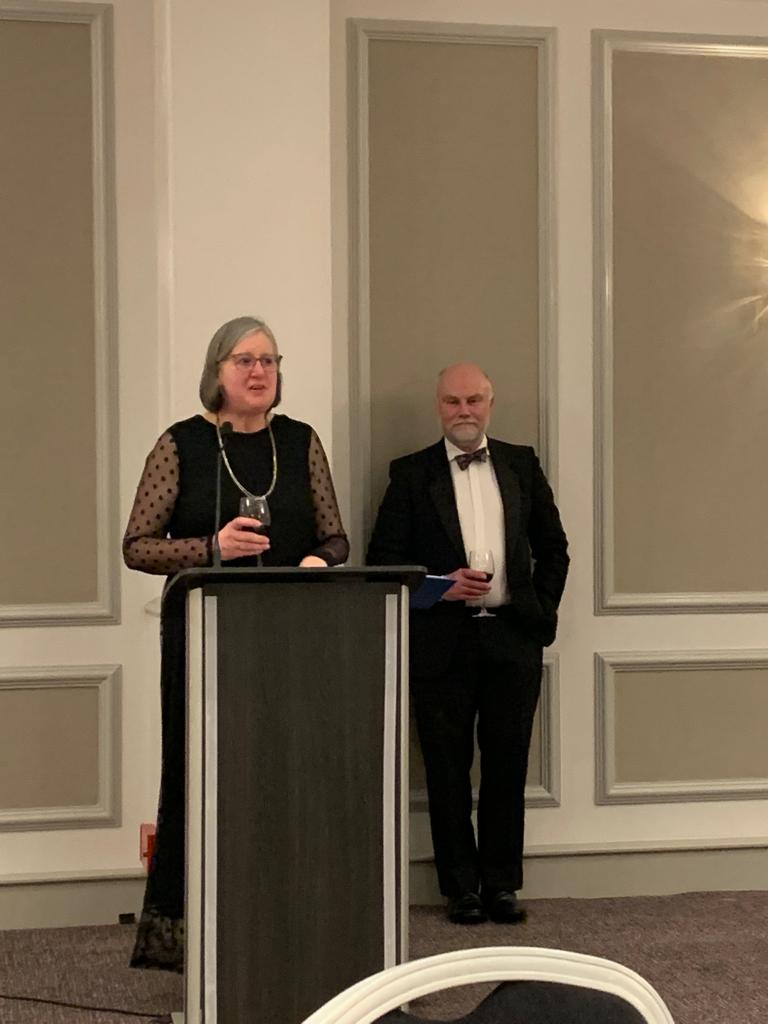 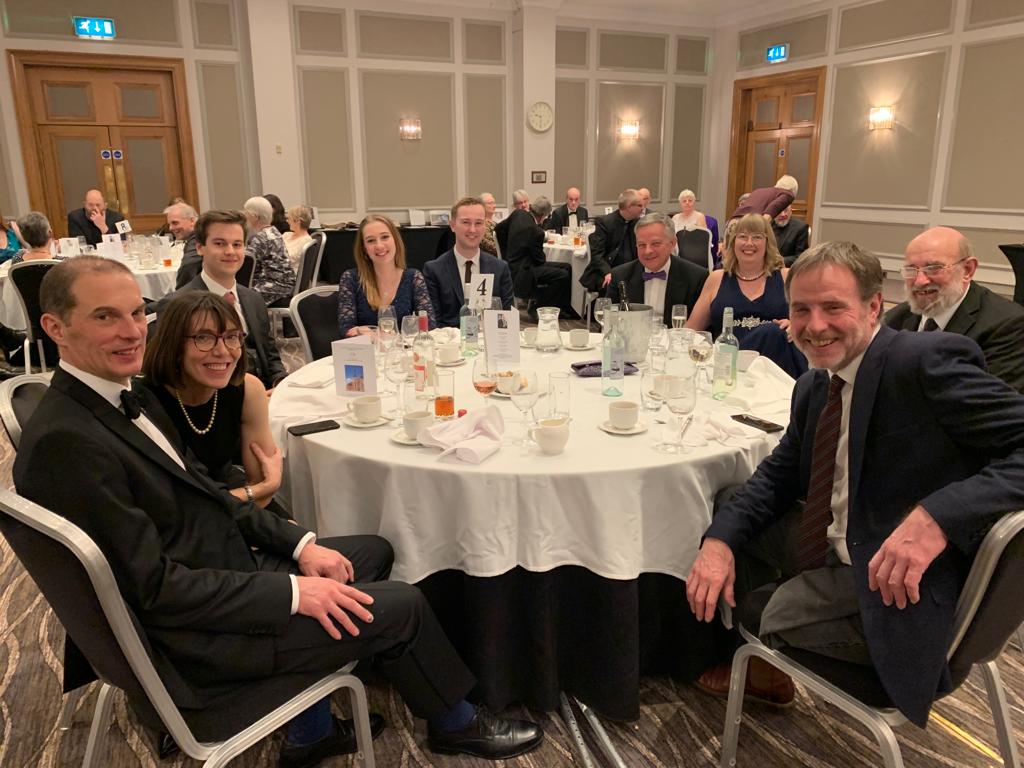 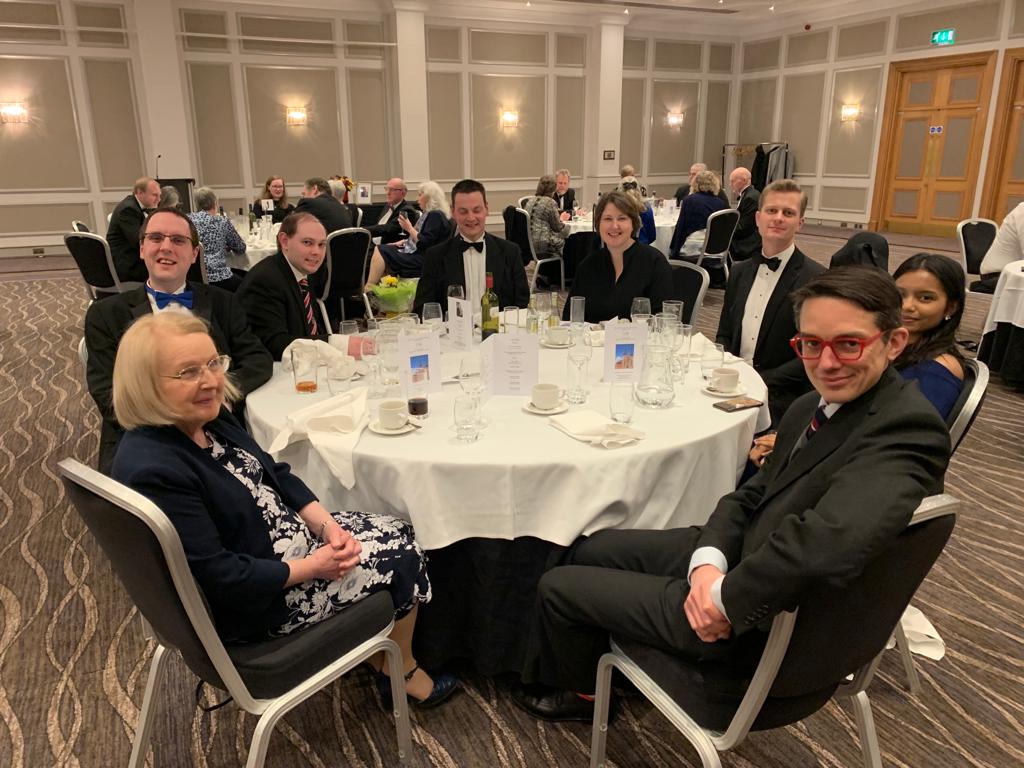 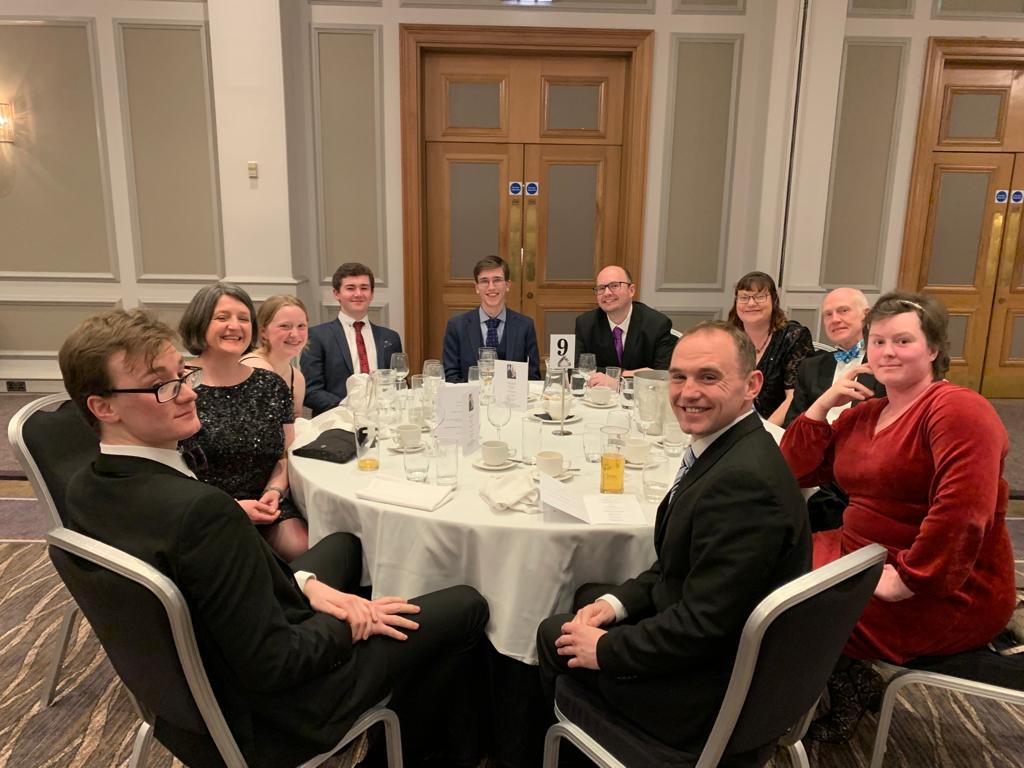 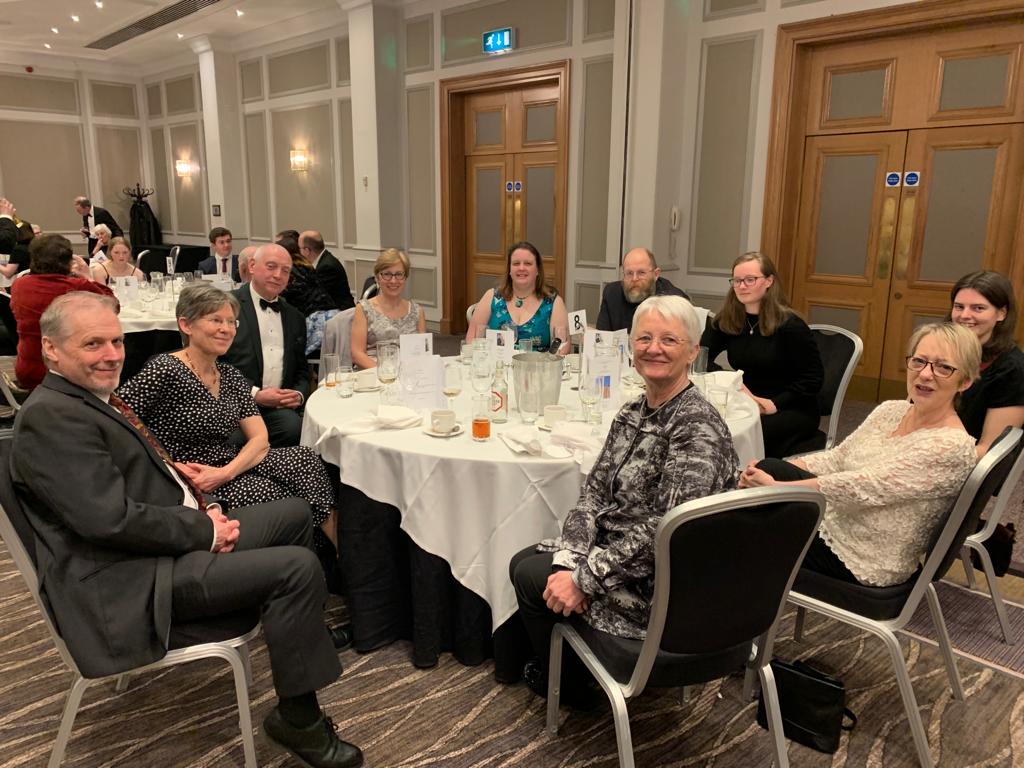 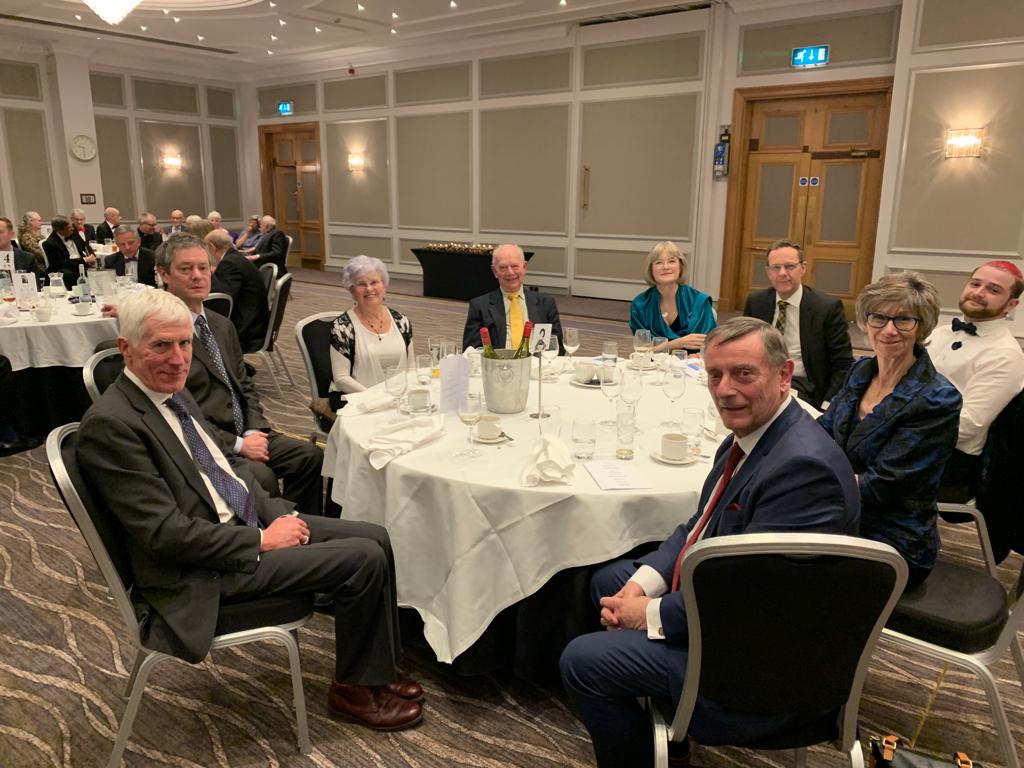 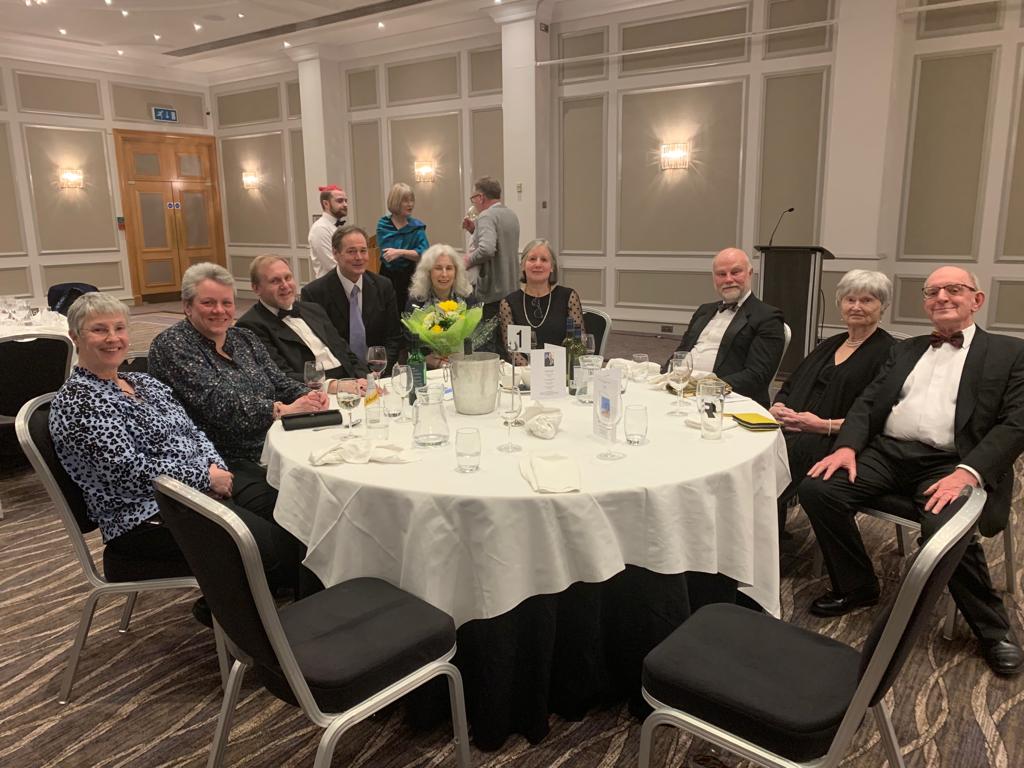 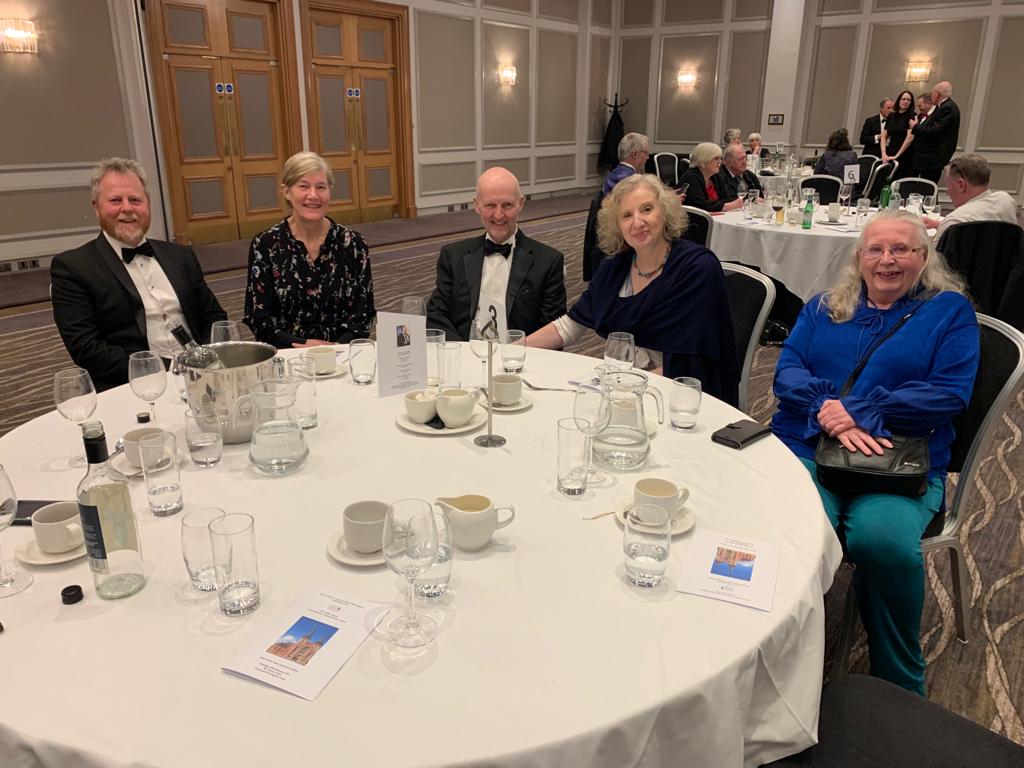 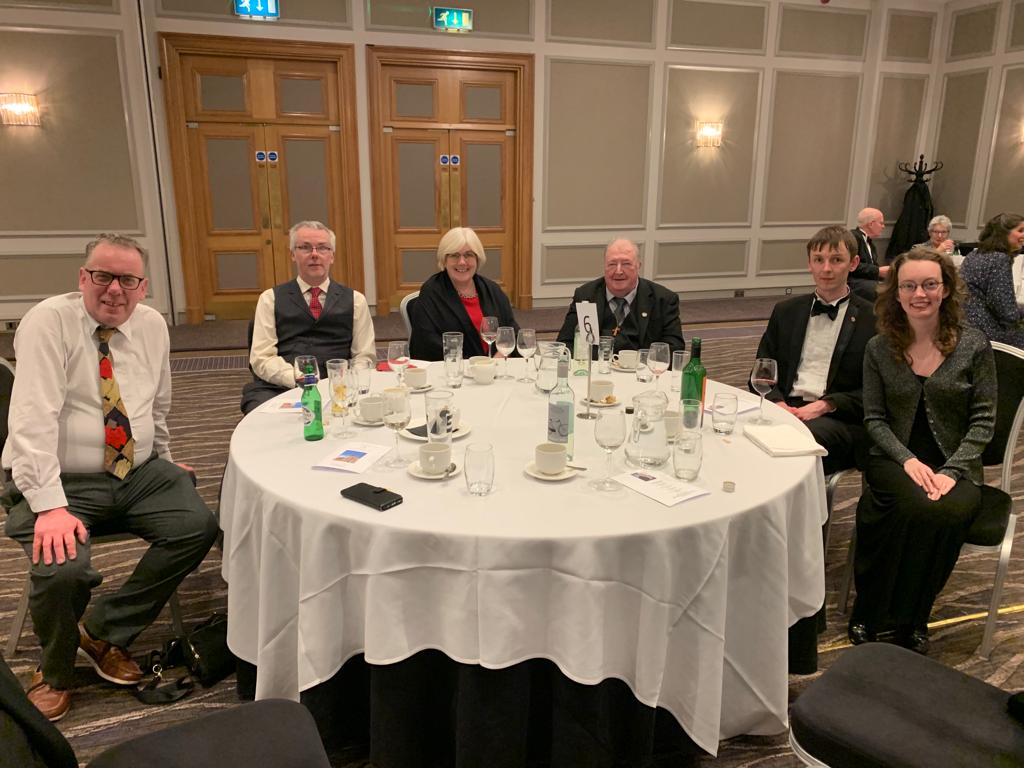 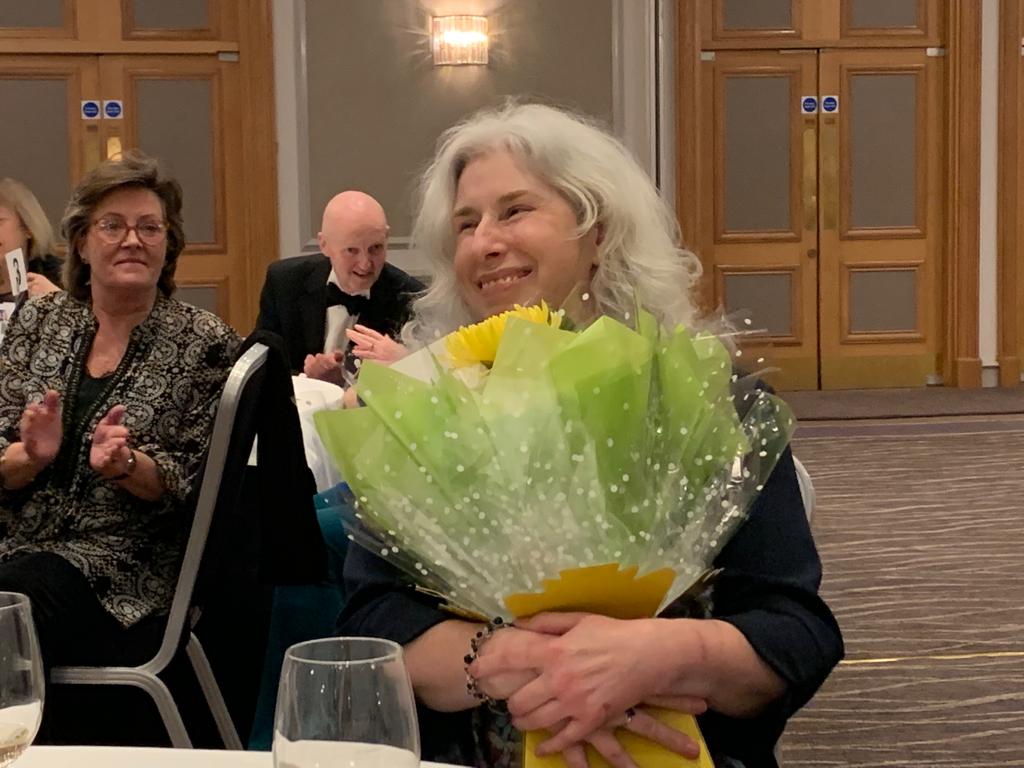 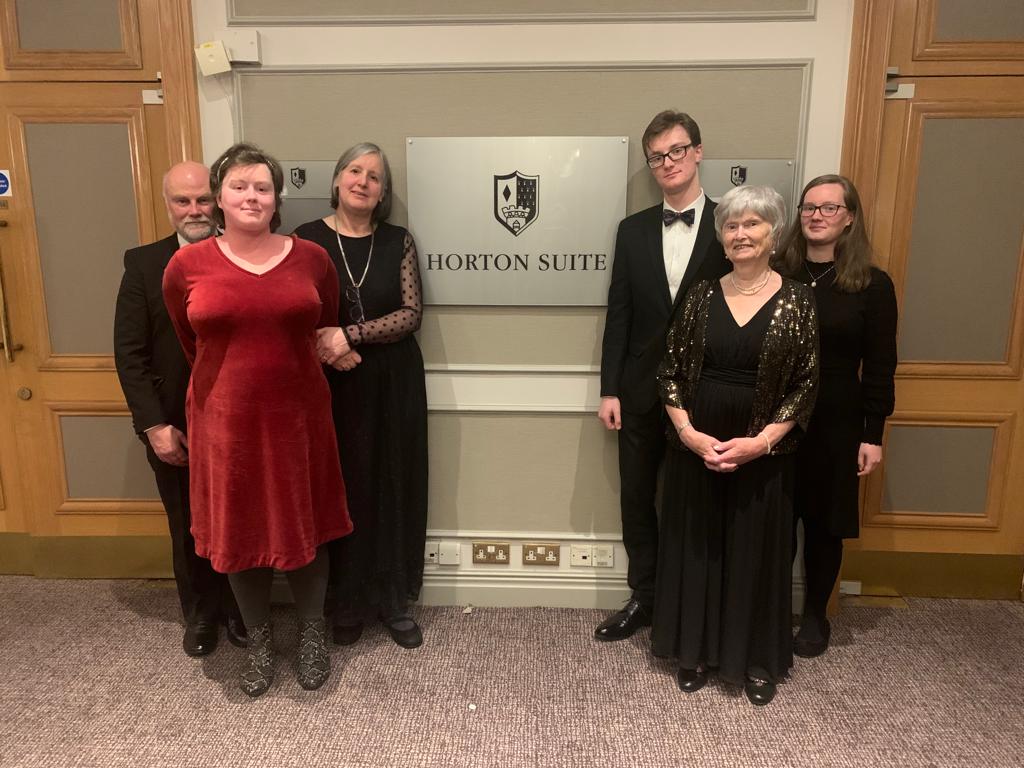 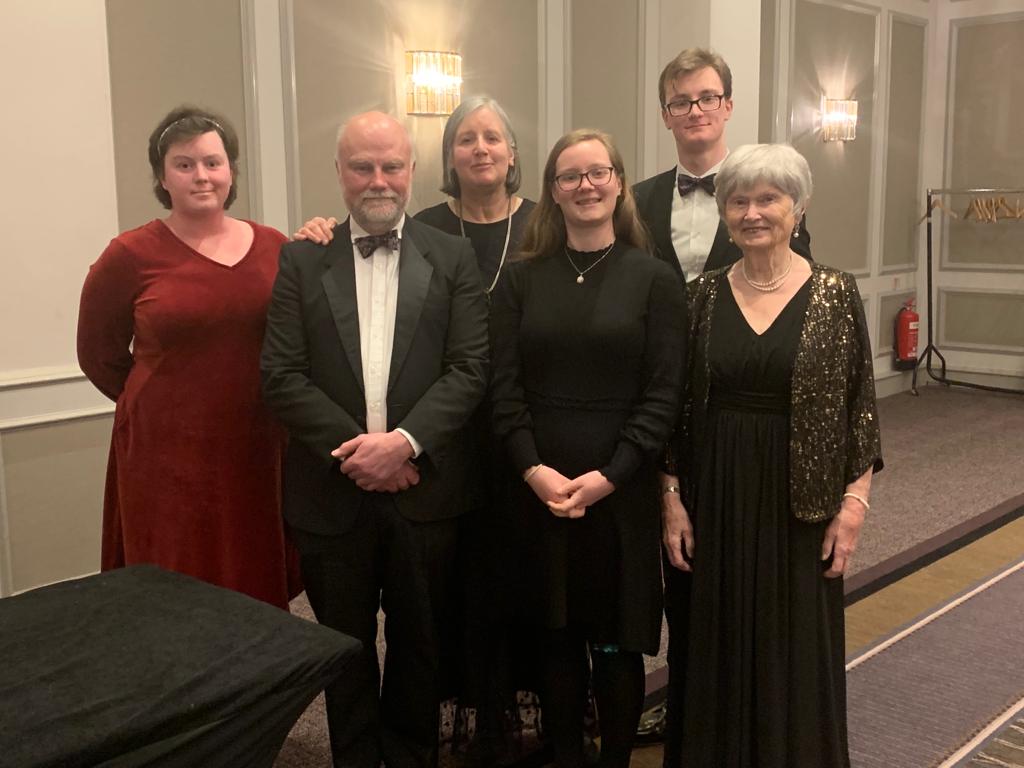 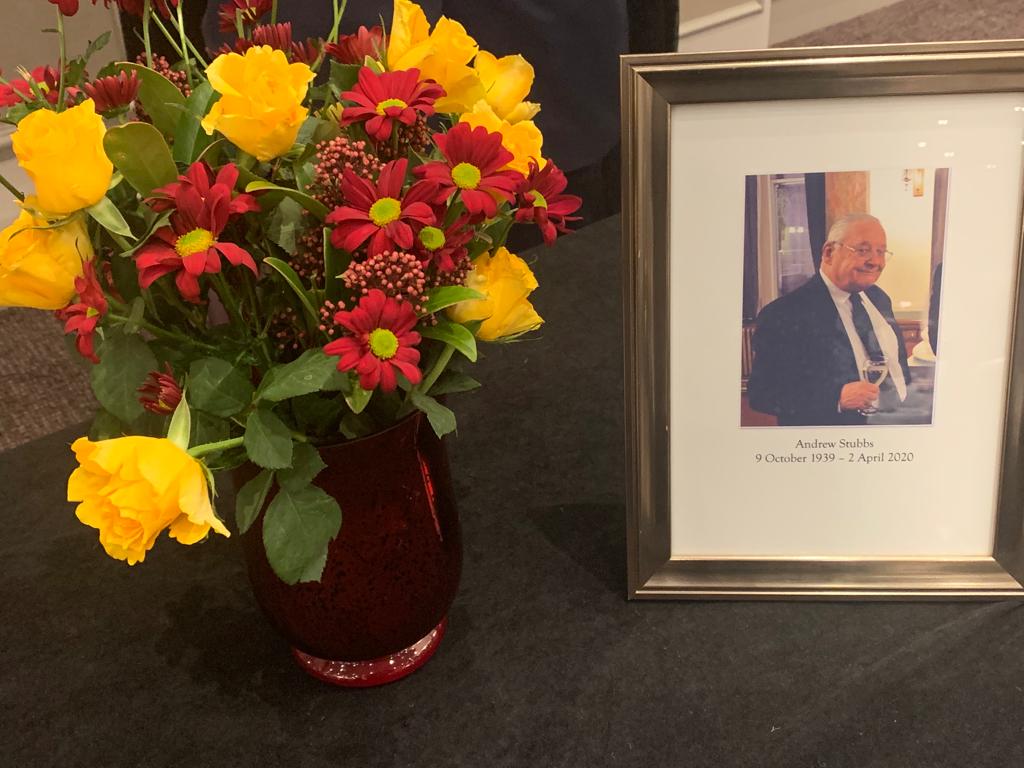