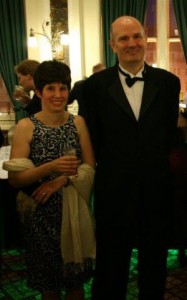 The 123rd Annual Henry Johnson Commemoration Dinner was held on Saturday 26th February 2011 in the Banqueting Suite, Birmingham Council House. The Guild of St. Martin’s are very fortunate to be able to celebrate this occasion in such a wonderful setting. It combines the grandeur and opulence of the high Victorian Architecture with the magnificent service and high quality food.

The meal consisted of leek and potato soup, followed by either Honey and Mustard Roasted Loin of English Pork, or Spinach and Pepper Tart topped with Halloumi Cheese as the vegetarian alternative, together with various beautifully presented vegetables. The dessert was a fabulous ‘Chocolate Delice’ served with Raspberry Sauce followed by coffee and mints.

Once all were replete of food and abundant alcohol, the more formal programme commenced. The Chairman for the evening was Jonathan Healy. Jonathan, born and bred within the Guild, has contributed a great part of his life to ringing. He learnt as a boy scout originally in Sutton Coldfield and has continually rung ever since. He has been Ringing Master at St. Philip’s Cathedral as well as Ringing Master of the Guild. He now rings both at St. Philip’s and St.Martin’s–in–the-Bullring.

Jonathan proposed the toast to the health of ‘Her Majesty the Queen’. He spoke about the life of Henry Johnson who grew up in Aston, Birmingham. He began by working in a timber yard and progressed up through the ranks to become it’s manager. He went on to speak about all the peals he had rung and of the meal to celebrate his 77th birthday, which to all intents and purposes was the beginning of the tradition of the dinner as it now stands. This was followed by the toast to ’The Memory of the late Henry Johnson’ which is traditionally taken in silence. 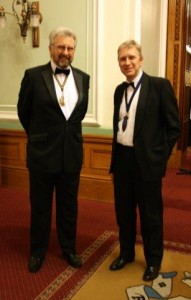 Simon Linford, Master of the Guild, spoke a few words about the fact that many ringers who would normally be present, were unable to attend, due to the trip of both the Cumberland Youths and the College Youths to Australia. Of particular note the absence of Mike Rigby, Clare McArdle, John Fielden and Andrew Stubbs was mentioned. However, in spite of the many ringers being the other side of the world, there were still well over 80 people at the dinner, including amongst it’s guests the Very Reverend Catherine Ogle, new Dean of St. Philip’s Cathedral and the Deputy Lord Mayor, Michael Wilkes, who on his blog following the dinner was happy to report that it was: – ‘one of the most interesting dinners during my time as Lord Mayor or Deputy Lord Mayor’. He referred to church bell ringing: – ‘that it was good to see that this historic heritage is being actively carried forward by such committed and energetic a body as Birmingham’s own Guild. It is no wonder that Birmingham is so widely regarded as a centre of excellence.’ This was followed by an interval when the wine and beer continued to flow. 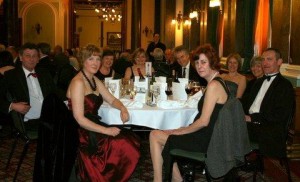 Robyn Tighe proposed ‘The Church’ and was able to give a witty account of her early ringing days in Solihull. She now rings at St. Mary’s and St. Anne’s in Moseley and explained the difficulty of ‘veering between those infamous steel bells at St. Mary’s with our unusable 16cwt tenor and St. Anne’s more delicate 7cwt tenor.’ She went on to bring to everyone’s attention the St. Mary’s Bells Installation Fund. www.stmarysbells.org

Responding on behalf of ‘The Church’, Father Charles Lawrence, now Vicar of Northfield gave an erudite, yet very droll speech. He gave a resume of his life as a priest in 3 dioceses and 7 parishes and his love of Blues and Boogie Woogie Music. This was followed by a wonderful display of Stedman Triples on Handbells. It was of the usual excellent standard. The band for this was Rod Pipe, David Hull, Michael Wilby and John Warboys.

Stephen Jones proposed the toast to the ‘Guests and Visitors’. He was Guild Master at Royal Holloway whilst studying Oceanography. He continued his studies at Cambridge and has been an active ringer ever since. He reminisced about a bell ringing trip to Ireland in 2009 with the College Youths.

Thanking Stephen, David Hull responded by giving a brief account of his life and how he works in computer science. Having rung for many years in Birmingham and including being Ringing Master at St. Philip’s Cathedral, he then moved to York. In his own words the local ringers said ’they were a bit short and a bit desperate’. To this comment everyone roared with laughter.

Moving on to propose the ‘continued prosperity of the St. Martin’s Guild’ he said that this was not a difficult task whatsoever, because the Guild manages to ring so many peals. It has ‘talent in abundance’. He referred to it’s continuous success in the National Twelve Bell Striking Competition.  Finally he congratulated the Guild on it’s push of Education in ringing with the ’Kids Ring Out’ programme and that this quality teaching ensured the future prosperity of the Guild.

Responding to David was the final speaker of the evening, Michael Wilby, the present Ringing Master of St. Martin’s–in–the-Bullring, who recounted his arrival in Birmingham as a student in 1992 and has been here ever since. He was able to list lots of interesting information about ringing within the Guild. He drew to people’s attention the enormous number of peals rung by St. Martins’ Guild members. He ended his speech by proposing a toast to the ‘Health of the Chairman’ Jonathan Healy who was teased mercilessly about his height. Not only did he endure this extremely well, he took it in good humour, came prepared for such comments and stood to be photographed in a miners safety helmet together with lamp attached! This encouraged the whole room to erupt into spontaneous applause, thus ending the formal proceedings of the evening.

Special thank are due to Richard Grimmett, the dinner secretary, who made the whole event possible. The next Henry Johnson Commemoration Dinner will be held on Saturday 25th February 2012. 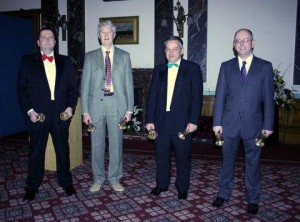 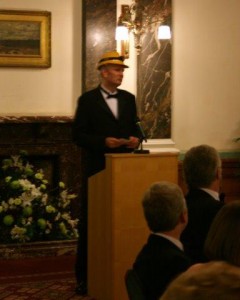